Arrest made in Moscow homicides investigation
Moscow Police Dept. - PRESS CONFERENCE - Dec. 30, 2022
December 15, 2022 White 2011-2013 Hyundai Elantra Update with Captain Roger Lanier
City of Moscow Police Department
KING ROAD HOMICIDES
SUMMARY
On the evening of November 12th, Kaylee Goncalves and Madison Mogen were at a local bar called Corner Club at 202 N. Main Street, in downtown Moscow, between 10 p.m. and 1:30 a.m. on November 13th. At approximately 1:40 a.m., Kaylee and Madison were seen on video at a local food vendor called the “Grub Truck” at 318 S. Main Street and used a private party for a ride home from downtown to arrive at their 1122 King Road residence around 1:56 a.m.
Investigators have determined that Ethan Chapin and Xana Kernodle were seen at the Sigma Chi house on the University of Idaho Campus at 735 Nez Perce Drive. At approximately 1:45 a.m., Ethan and Xana are believed to have returned to the residence at 1122 King Road. It was previously reported that Ethan resided at the home; however, it has been determined that he was only visiting.
Detectives believe that on November 12th, the two surviving roommates had also been out in the Moscow community, separately, but returned home by 1 a.m. on November 13th. The two did not wake up until later that morning.
On November 13th, the surviving roommates summoned friends to the residence because they believed one of the second-floor victims had passed out and was not waking up. At 11:58 a.m., a 911 call requested aid for an unconscious person. The call was made from one of the surviving roommates’ cell phones inside the residence. Multiple people talked with the 911 dispatcher before Moscow Police arrived at the location. Officers entered the residence and found two victims on the second floor and two victims on the third floor.
Autopsies were conducted on November 17th. The Latah County Coroner confirmed the identity of the four murdered individuals and their cause and manner of death as homicide by stabbing. The coroner stated the four victims were likely asleep, some had defensive wounds, and each was stabbed multiple times. There was no sign of sexual assault.
CRIME TIPS
Detectives are looking for context to the events and people involved in these murders. To assist with the ongoing investigation, any odd or out-of-the-ordinary events that took place should be reported. Our focus is the investigation, not the activities. Your information, whether you believe it is significant or not, might be the piece of the puzzle that helps investigators solve these murders.
Telephone: 208-883-7180
Email: tipline@ci.moscow.id.us
Digital Media: https://tips.fbi.gov/digitalmedia/a7a83fc9a9c5fdc
https://www.ci.moscow.id.us/1064/King-Road-Homicides
Moscow Police PIO
https://www.youtube.com/@moscowpolicepio
City of Moscow ID
https://www.youtube.com/@CityofMoscow
Resources
In Remembrance
https://www.uidaho.edu/remember
Vandal Family Support Resources
https://www.uidaho.edu/student-affairs/dean-of-students/support-resources
The National Organization of Parents Of Murdered Children
https://pomc.org/
The Compassionate Friends
https://www.compassionatefriends.org/
Idaho Victim Assistance and Victim Compensation programs
https://ovc.ojp.gov/help-for-victims/help-in-your-state/idaho
Victim Connect Resource Center
https://victimconnect.org/
Public Safety Professionals Support
https://www.nami.org/Your-Journey/Frontline-Professionals/Public-Safety-Professionals
Help for Victims
https://ovc.ojp.gov/help-for-victims/overview
Ayuda para las víctimas de delitos
https://ovc.ojp.gov/help-for-victims/ayuda-para-las-victimas-de-delitos
National Organization for Victim Assistance
https://www.trynova.org/
Understanding survivor’s guilt
https://centerstone.org/our-resources/health-wellness/understanding-survivors-guilt/
Privacy & Dignity: A Guide to Interacting with the Media
https://victimsofcrime.org/wp-content/uploads/2020/08/Privacy-and-Dignity-final.pdf
Arrest made in Moscow homicides investigation
https://www.ci.moscow.id.us/DocumentCenter/View/24998/12-30-22-Arrest-Made-In-Moscow-Homicides
Dec. 30, 2022 Arrest Made in King Street Homicides
https://www.uidaho.edu/communications
Non-Dissemination Order
Moscow Homicide Case Nondissemination Order
https://www.ci.moscow.id.us/DocumentCenter/View/25003/01-03-2023-Moscow-Homicide-case-nondissemination-order
Nondissemination Order
https://coi.isc.idaho.gov/docs/case/CR29-22-2805/010323%20Nondissemination%20Order.pdf
Amended Nondissemination Order
https://coi.isc.idaho.gov/docs/case/CR29-22-2805/011823%20Amended%20Nondissemination%20Order.pdf
Probable Cause Affidavit
Due to the graphic nature of the affidavit, I have decided not to post it on this page. Sadly, it has fueled misinformation, rumors, and speculation about the surviving roommates of this heinous crime. These young women deserve compassion and empathy, not online malcontents cooking up half-baked theories. 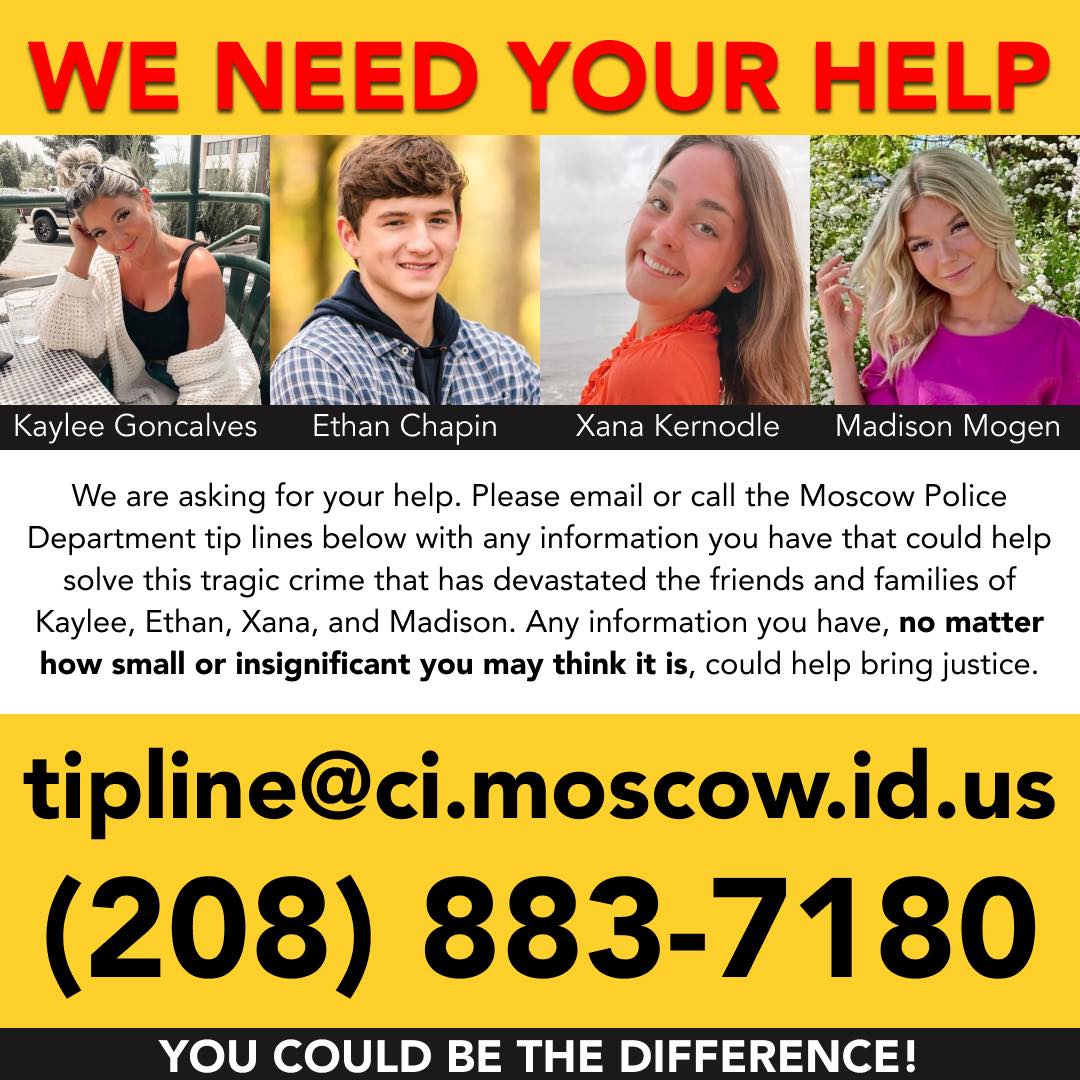