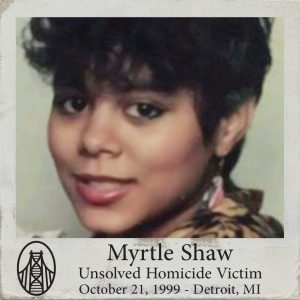 June 6, 2022 | By Kasey Batchelor
This story is part of a collaborative project between Project: Cold Case and a University of North Florida Journalism class.
Myrtle Shaw loved her children more than anything in the world.
“I remember there’s an old home video of me going up to my mom on Thanksgiving and giving her the biggest hug, asking her for pie,” her daughter Chasity Shaw said.
“She just held me and was rocking me back and forth for the longest time,” Chasity recalled. “She was telling me, ‘You can’t have your pie unless you eat all your dinner.’”
Myrtle Shaw had a rough upbringing. Originally from South Bend, Indiana, she grew up in foster care but later reconnected with her biological mother. She had her daughter Chasity at the age of 16.
Shortly after Chasity’s birth, Myrtle’s mother died. Myrtle moved multiple times in the following years, from Indiana to Detroit and to Atlanta. During this time, she would have two more daughters and a son.
When Chasity was 12 years old, she and her siblings were taken away from their mother and put into foster care. Myrtle struggled with drug addiction throughout her adulthood and never had a stable support system. The fathers of Myrtle’s children were never fully involved in their lives.
Myrtle worked as a medical assistant and had a few retail jobs. She loved cooking, crocheting, and all things home decor.
“She was fearless, free-spirited, and just full of life,” Chasity said of her mother. “She was always laughing and had a really big heart.”
Myrtle always wore beautiful dresses and had “hair like a baby doll,” as Chasity described it. She was blessed with naturally soft, beautiful hair. Chasity loved to watch her mother wash and brush it, asking her, “Mom, why can’t I have hair like yours?”
On October 21, 1999, Myrtle’s body was found in Detroit’s River Rouge Park by a jogger. Based on the autopsy, police suspect that she was killed elsewhere before being dumped there. She suffered gunshot and stab wounds.
At the time of her murder, she was living with an older man and a daughter, where police say they most likely engaged in drug use.
Myrtle was only 33 years old. Her case has never been solved.
The Shaw family was able to get Myrtle’s body back to Indiana after the murder to have her funeral services.
In the weeks leading up to her death, Chasity had tried calling her mother repeatedly, but she never answered. Chasity, now 16 years old, and her siblings were still in foster care at the time.
David Morgan, a friend of Myrtle’s and reportedly the last person to see her alive, said, “I have a lot of good memories of her. She was special to me and I think she would’ve wanted to be remembered as a caring person and a great mother.”
The police work on Myrtle’s case is close to nonexistent. Police performed an autopsy and returned the dirtied clothes that her body was found in back to Chasity’s grandmother. Detectives have also ignored phone calls from Chasity Shaw over the years, she says.
Chasity Shaw, along with her siblings, has had to deal with the trauma of losing their mother in such a violent way their whole lives. Without knowing who is responsible for Myrtle’s murder, they are not able to truly have any closure. There is, and will always be, the emotional loss and pain of losing a mother in such a brutal manner.
Chasity is now grown and currently lives in Houston, Texas. She’s the mother of two beautiful sons. She continues to fight for answers in her mother’s case.
If you have any information on the unsolved murder of Myrtle Shaw, please call the Detroit Police Department at (313) 596-1800.
https://projectcoldcase.org/2022/06/06/myrtle-shaw/