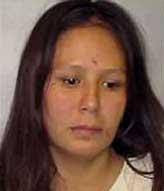 Charlene Cecelia Couture
Missing Since
03/01/2007
Missing From
Rosenberg, Texas
Classification
Endangered Missing
Sex
Female
Race
Native American
Age
35 years old
Height and Weight
5'7, 170 pounds
Distinguishing Characteristics
Native American female. Brown hair, brown eyes. Couture is of Sioux and Ojibwe descent. She may use the nicknames Butterfly and/or Char. She may use the alias names Charlene Cecelia Chez, Charlene Cecelia Coutur, Charlene Cecelia Couture-Cruz, Cececlia Cruz, Chez Cruz, Sara Cruz, and/or Sarra Cruz. Couture has scars on her left cheek, left forearm and near her eye. She has tattoos on all the fingers of her left hand, and a tattoo of the name "Cruz" on the back of her neck.
Details of Disappearance
Couture was last seen in Rosenberg, Texas on March 1, 2007. She is originally from Minnesota. She and another Minnesota woman were living with two men in Fort Bend County in 2007. The other woman returned to Minnesota, but Couture vanished without a trace. Her disappearance was not reported to authorities until 2012.
In the summer of 2012, investigators searched a rural property along the Brazos River, north of Rosenberg, Texas, for Couture's body. They stated they have two male persons of interest in her presumed death; one of them is deceased and the other is incarcerated on unrelated charges.
The search turned up no evidence, however, and little information is available in Couture's case. Her disappearance remains unsolved.
Investigating Agency
Fort Bend County Sheriff's Office 281-341-4665
Fort Bend County Crime Stoppers 281-342-8477
http://www.fortbend.crimestoppersweb.com/sitemenu.aspx?P=index&ID=536
https://charleyproject.org/case/charlene-cecelia-couture