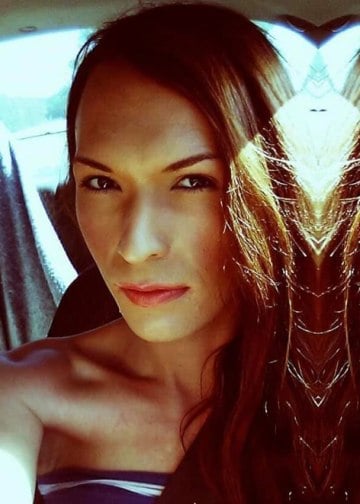 Aubrey Dameron
Missing Since
03/09/2019
Missing From
Grove, Oklahoma
Classification
Endangered Missing
Sex
Male
Race
Native American
Date of Birth
10/22/1993 (29)
Age
25 years old
Height and Weight
5'9 - 5'10, 130 - 170 pounds
Clothing/Jewelry Description
A black jacket, a black shirt, a black miniskirt, black hose and black leather boots with heels.
Medical Conditions
Dameron has a history of alcohol and drug abuse. She has epilepsy and needs anti-seizure medication, as well as other prescription medicines, which she doesn't have with her.
Distinguishing Characteristics
Native American male. Brown hair, brown eyes. Dameron is transgender; biologically male, she identifies and lives as female. She began identifying as a female while in high school; her previous name was Austin Dylan Joel Dameron. She had begun to medically transition but hadn't completed the entire process by the time of her disappearance. Dameron's ears are pierced and she has breast implants. She has a tattoo of a triquetra on the back of her neck, a tattoo of the word "Shorty" and a circular design on her upper left arm at the shoulder, and tattoos on both hips. Photos of some of her tattoos are posted with this case summary. Dameron is of Cherokee descent.
Details of Disappearance
Dameron was last seen walking away from her mother's residence off 280 Road north of Grove, Oklahoma at 3:00 a.m. on March 9, 2019. She had messaged several people on Facebook asking for a ride from her mother's home, but no one responded. She has never been heard from again and it's unclear whether anyone picked her up. She left home without her cellular phone, her purse or medication.
She had been living with her former boyfriend, Jay C. Pierson, in New Mexico, but left on August 18 and moved back to her family in Oklahoma to get help for her alcoholism and drug abuse. Pierson then moved to Colorado. Dameron disappeared six months later.
Deanette Rowbotham, a former close friend of Dameron's, called Dameron's former boyfriend in Colorado, Jay C. Pierson, on March 12 and said that Dameron was being held against her will in Ketchum, Oklahoma for drug money owed. Rowbotham said that if Dameron's captors didn't get the money they wanted, they were going to kill Dameron. She asked Pierson for money and said she'd contribute some of her own to help get Dameron released.
When the police interviewed Rowbotham about what she'd told Pierson, she admitted her claim of kidnapping and ransom was untrue and was charged with extorting money from Pierson. A photo of her is posted with this case summary. When authorities asked Rowbotham what she thought had really happened to Dameron, she said she didn't think Dameron was really missing or that her parents really didn't know her whereabouts.
Police also got a lead that Dameron's mother's boyfriend had said he had killed her, but they have been unable to confirm this story and haven't named any suspects in her disappearance. Because of her transgender identity and the fact that it's uncharacteristic of her to be out of touch with her family, she's considered to be at risk. Her case remains unsolved.
Investigating Agency
Delaware County Sheriff's Office 918-253-2700
Oklahoma State Bureau of Investigation 918-582-9075. Tipline 1-800-522-8017
https://charleyproject.org/case/aubrey-dameron