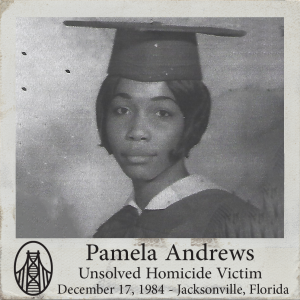 Pamela Andrews
February 11, 2019 | By Kevin Beaugrand
This story is part of a collaborative project between Project: Cold Case and a University of North Florida Journalism class.
At one o’clock in the morning, December 17, 1984, Vivian Andrews woke to pray for her five sisters.
“I started with my older sister and I went to my sister Brenda, to my sister Joyce, to my sister Lily, and I got to Pamela,” Andrews said. “And I said, ‘Lord, you know that she’s miserable. And I’m asking you Lord, whatever your will is, let your will be done.’” Four and a half hours later, Pamela’s body was discovered by a can collector behind the YMCA on Riverside Avenue.
Pamela Andrews was described by her sister as a vibrant, complex, articulate world traveler. Andrews was a writer and poet who studied journalism at the University of North Florida in the 1970s. Her sister Vivian said she “could tell a story about you and make the world laugh or make you cry.”
Pamela was born on October 7th, 1950, and grew up in Jacksonville. She later moved to Baltimore, where she attended community college and received her associate’s degree. A forward-thinking woman, then 21-year-old Pamela welcomed 14-year-old Vivian to her home when Vivian sought to escape the racism of the South in 1972.
“I told my mom, I said, ‘Mom, I respect you, but if a white teacher hits me there’s going to be a problem in Houston.’ And my mother said, ‘Well, they’ll have my permission,” Vivian said. “I wasn’t going to put up with it. I was like, ‘Power to the people,’ and my mom was like, ‘No!’ Pamela was like, all power to the people! She was a little woman but she stood her ground.”
The sisters relocated to South Florida in the early ’80s, which was ground zero for cocaine trafficking and abuse. Sadly, Pamela was one of many who were swept into that violent world.
“For 34 years, every year, I write or call the Jacksonville Sheriff’s Office because I love my sister and her spirit is so alive within mine,” Vivian said. “I owe her, every December, I owe that to her.”
If Pamela were alive today, she would be a great-grandmother.
While Vivian hopes for a resolution in her sister’s cold case, she has made peace with her sister’s murder. “”Whoever it was, wherever they are, they have to make their peace the heart.”
Though her sister is gone, Vivian keeps Pamela’s spirit alive with her wherever she goes.
“I’ll sum it up in the name she gave herself, Nneka Ayanna,” said Vivian. “It means ‘tender joy.’ That’s my tender joy, for life. Every morning, I have a dose of tender joy.”
Jacksonville Sheriff's Office
Crime Tips 904-630-0500
First Coast Crime Stoppers 1-866-845-TIPS (8477)
https://projectcoldcase.org/2019/02/11/pamela-andrews/