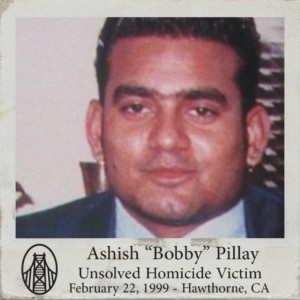 Bobby Pillay
March 7, 2022 | By Daysia Borden
This story is part of a collaborative project between Project: Cold Case and a University of North Florida Journalism class.
Bobby Pillay would spend many days buying meals at the local fast food spots and handing them out to homeless people.
“He was focused on putting a smile on people’s faces. He was not worried about the money,” his sister Ashlyn Pillay said.
While Bobby had his own car, he hated using his own gas. Instead, he would take his sister’s car. It annoyed Ashlyn so much.
It was once a pet peeve for Ashlyn. Now it is a treasured memory. She wishes Bobby would take her car to McDonald’s and feed those in need one last time.
That stopped in 1999 in Hawthorne, California, when Ashish “Bobby” Pillay had his life taken from him.
“He took my car the day before he died. He told me that I would miss him taking my car, as if he knew,” Ashlyn recalls.
His murder remains unsolved.
Bobby was born on the mountainous, tropical rainforest island of Fiji. He grew up the oldest in the family with two older sisters. He knew that it was his job to always protect his sisters.
One day in Fiji, Ashlyn and Bobby missed the bus to school while their father was at work.
“We were three miles from the school. Bobby carried me on his back all the way,” Ashlyn said. “I was a chubby kid and scared, but he told me not to look down and keep my eyes shut. I was able to do that, but I dropped my backpack in the river. Bobby took a dive for it.”
When Bobby’s family decided to move to the United States to be closer to other family members and find a better life, they migrated to Los Angeles, California.
Bobby’s dream job was to serve in the United States Navy. He frequented The Castle, a local arcade, to play naval and airplane games. His favorite movie was Top Gun and was part of his inspiration to become a Navy SEAL. One of his favorite places to visit was the Naval Base San Diego.
Bobby married his childhood sweetheart. The two were only married for a year before Bobby’s murder.
The couple did not have any children yet, but Bobby loved children. He was a family man dedicated to seeing his loved ones happy.
“He would have been the best uncle. I can see some of him in my children even though they have never met him,” Ashlyn said with a soft smile.
He was a great cook and cooked for the family often. His favorite food above all was his mother’s Indian cuisine.
Bobby enjoyed inviting the people he loved over and having cookouts.
“Bobby cooked a lot of things. He loved making Chinese food, barbecue, and sushi,” Ashlyn recalled.
Bobby’s happy place was outdoors. He made sure he had plenty of hobbies to fill his free time. Occasionally, he would play golf and go fishing to relax. He often went bungee jumping and flew planes for fun.
“He loved anything that would push his adrenaline to the max,” Ashlyn said.
Some of Bobby’s family members practiced Hinduism and some were Christian. He became a born-again Christian at the age of 17. Falling in love with the Christian religion, he shared what he was learning with his sisters, eventually resulting in their conversion.
“He would go and watch Billy Graham’s Crusades and share the word with my sister and me. We decided to convert too. He loved going to church and gospel entertainment,” Ashlyn recalled.
On the night of February 22, 1999, Bobby headed home from work at the One Stop Auto Body, Inc. On the commute, he noticed that someone was following him.
According to a witness statement, Bobby came to a stop at the end of the street where his parents lived. After coming to a stop, a gunman got out of the car. The gunman shot Bobby multiple times at close range.
He was transported to the hospital where he was later pronounced dead. Bobby Pillay was just 26.
“My mother was upset with him days before his death because he did not bring her flowers for Valentine’s Day. He told her, ‘Don’t worry, Mama, pretty soon I will fill your house with flowers.’ Days later, the house was filled with flowers,” Ashlyn recalled.
Ashlyn Pillay and her family keep Bobby alive in their minds by always remembering his magnetic smile and the good times. Although her children never got the chance to meet their uncle, Ashlyn says that both of her children have traits of him. She says what she misses most about her brother is the comfort he gave her.
Bobby’s parents have a separate way of remembering him. They do not celebrate their wedding anniversary because it is the day before Bobby was killed.
To remember Bobby on his birthday each year, the family gathers and watches Top Gun, his favorite movie.
If you have any information on the unsolved murder of Ashish “Bobby” Pillay, please contact the Los Angeles County Sheriff’s Office at (213) 229-1700.
https://projectcoldcase.org/2022/03/07/ashish-bobby-pillay/