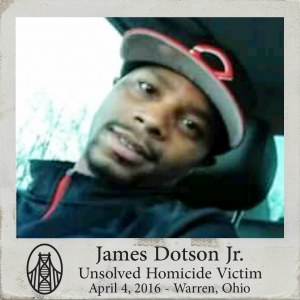 James Dotson, Jr.
Source: Project Cold Case
December 6, 2021 | By Daniel Gajewski
This story is part of a collaborative project between Project: Cold Case and a University of North Florida Journalism class.
The heartbeat of the family. That’s how James Dotson, Jr. will forever be remembered by his family. His infectious smile could light up an entire room.
That heartbeat was abruptly stopped on April 4, 2016, when James was shot to death in Warren Township, Ohio. His body was discovered in the parking lot.
James was raised in Warren, Ohio by his mother Margaret Poole and stepdad Charles Poole. Charles had been in James’s life since James was six months old.
James was an average kid. He played sports, listened to music, went to school, and, of course, loved to tease his older sister Shewanda.
James was mischievous growing up. He was a prankster who liked to make sure his older siblings were always on their toes. James would go back and forth teasing with his siblings, but it was always good fun.
“He was like those Sour Patch Kids, you know. First, he was sour, then he was always sweet after. That’s who James was,” his older brother Tommie said.
Shewanda agreed. “We had gotten into an argument when we were younger, and he had pushed me down the steps and I went through the window and cut my chin open,” she said. “He apologized. I know he meant it.”
Shewanda was only a year older than James, or JJ as she called him, but she was always looking out for her younger brother. She described James as a roadrunner because he couldn’t sit down – he always had to be moving. His father Charles said the same thing.
“It’s not that he didn’t like school, he just didn’t like going. He would walk all the way home from school sometimes,” Charles recalled.
James never got to finish high school. He was arrested and sentenced to prison when he was just 15 years old. He spent 15 years of his life in prison.
His family says that he knew what he did was wrong, and upon his release, planned to turn his life around. James served his time, and, when he got out, he was changed. He proposed to his then-girlfriend, and she soon became pregnant. But James would never get to meet his daughter.
On April 4, 2016, he was shot outside the J & L Lounge in Warren Township around 2 a.m. The bar had a reputation for being filled with violence and has since been closed.
The police arrived shortly after the shooting and the bar was closed for the night. No one was willing to talk. The police report states that bar managers claimed the security cameras were not working and there was no video of the incident.
“I don’t know why he would be there on that night,” Tommie said. “We don’t go on that side of town.”
The Poole family continues to question why James was there that night. Tommie said that he had spoken to James that day, and they had plans to hang out the next day.
Margaret said she talked to her son that day. He told her how excited he was for his baby to arrive. He had just finished setting up her room in the house that he had recently bought.
James’ family worked hard to get the bar where their son took his last breath shut down. They eventually accomplished that goal. The bar officially was boarded up in 2019.
The bar being shut down was only a small step in getting James the justice he deserves. His entire family works tirelessly to find answers pertaining to his death. They pray that they find justice.
Most importantly, they make sure that James is remembered every day.
James’ daughter is a spitting image of her father, Margaret says. Every time she sees her granddaughter, she’s reminded of James.
The one thing the Poole family remembers most about James – they all agree – is his smile.
“Even when he had just gotten you in trouble, you could see him smiling in the corner. You can’t possibly be mad at the smile,” Tommie recalled with a smile of his own.
Though James is no longer here, he continues to be the heartbeat of his family.
If you have any information on the unsolved murder of James Dotson, please call the Warren Township Police Department at (330) 898-5588.
https://projectcoldcase.org/2021/12/06/james-dotson-jr/