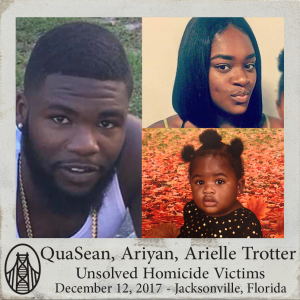 Source: Project Cold Case
July 22, 2019 | By John Newsom
This story is part of a collaborative project between Project: Cold Case and a University of North Florida Journalism class. The student credited above wrote this story as a class project.
Growing up, QuaSean Trotter was surrounded by family.
Natasha Richardson, QuaSean’s mother, moved her family from the Carolinas to Jacksonville, Florida to get a fresh start for her and her kids. According to Richardson, QuaSean loved football, fishing, and his family. He was selective about his friends and always wanted a family of his own.
He loved his whole family, but he especially loved spending time with his younger brother Quavarius. All the boys in school knew to be careful about dating his younger sister. QuaSean always told his siblings to do the right thing, even if he didn’t.
Richardson said that during high school, QuaSean met Ariyan Johnson. QuaSean was so proud to call her his girlfriend. He loved her. Natasha remembers QuaSean calling her, gushing that he had found this amazing girl. She was talented, beautiful, and smart. She designed clothing and made candied fruit. Trotter’s older sister, Diejah Dent, described Ariyan as “soft spoken and sweet.”
Ariyan loved QuaSean. The two were inseparable. They did everything together. Then, Ariyan got pregnant. QuaSean was ecstatic. He would be a father to a beautiful baby girl. They named her Arielle.
On the night of December 12, 2017, QuaSean, Ariyan, and Arielle were murdered.
They were a tight knit family. QuaSean loved being a father. He would’ve done anything to provide for and protect his family.
When QuaSean and Ariyan would go off by themselves for a night out, they often had his sister babysit. At a very young age, Arielle had already started to take after her father. She knew her family and loved them. She was quick to decide if she liked you or not. If she liked you, she loved you. Her favorite toys were her family. She loved playing with her family. That’s how Natasha Richardson raised QuaSean and his siblings, and that’s how QuaSean was going to raise Arielle.
Arielle was an incredibly happy baby. Dent said that Arielle was a loving little girl. If Arielle loved you, she really loved you. She may have been very young, but she formed opinions about people quickly.
Dent loved being an aunt. She remembers Arielle looking a lot like her father. Arielle was Dent’s first niece, and that meant a lot to her. She remembers the family as a close-knit, loving family. Dent would facetime with them frequently.
She can’t believe anyone would’ve hurt them. She was in South Carolina when they were murdered. “I wouldn’t wish this on anyone,” she said. “But this wasn’t the right group of people.”
For a long time, the Trotter family lived in the Arlington area of Jacksonville, an area that locals refer to as Sin City. It was a rough area. QuaSean always told Richardson to take the rest of his siblings and get out of there.
The night of the incident, Richardson was at a basketball game for her son Bernie. Her youngest son Jordan was playing with her phone. She missed several calls from her sister. Jordan kept dismissing the calls so he could continue playing a game. When she finally realized she was getting calls, she answered to her sister yelling into the phone. Qausean, Ariyan, and Arielle were dead.
Richardson doesn’t remember what she said next. She doesn’t remember driving to the house. She doesn’t remember a lot of things from that night. She remembers arriving at a crime scene, seeing a burned, charred house, and not being able, or willing, to enter.
QuaSean and Ariyan had been shot. Whoever had committed this terrible act had set fire to the Christmas tree in the house. Richardson believes it was an attempt to cover their tracks and destroy evidence. The smoke took Arielle’s life. The house wasn’t even theirs; it was a friend’s house.
At first, Richardson said she called the detective frequently. She wanted answers and justice. Months passed. She found it too hard to keep calling and not get information. She now waits for the detective to call her.
Richardson said she has no clue who could have committed the crime. QuaSean was so picky about his friends, she can’t believe anyone close to him would have done anything to hurt him or his family. She wants the sense of closure that would come with catching the murderer. It worries her that someone capable of doing something so horrible is walking free, and no one knows who it is. She wants justice, but she doesn’t know how much it will help. “You lose a part of yourself,” she said. “You know you won’t hear their laugh and they won’t call your phone.”
She tries to be there for her other children. They miss their brother, but they have a hard time talking about it. Richardson does her best to comfort them. They all do their best day by day. Unlike her kids, talking helps her.
Richardson got married last year. QuaSean was supposed to walk her down the aisle. She walked herself down the aisle instead.
Richardson and her family take trips in honor of QuaSean and his family. They always wanted to travel, so she takes advantage of opportunities when she can. She’s taking her family on vacation this year, then going on a cruise with just her husband. It will be the honeymoon she never got. She says you have to live for the moment. You never know what will happen tomorrow.
“They were awesome people,” Dent said of her brother and his family. “They will always be remembered.”
If you have any information on the unsolved murder of QuaSean Trotter, Ariyan Johnson, and Arielle Trotter, please call the Jacksonville Sheriff’s Office at (904) 630-0500. To remain anonymous and possibly be eligible for a $3,000 reward, call First Coast Crime Stoppers at (866) 845-TIPS.
https://projectcoldcase.org/2019/07/22/quasean-ariyan-and-arielle-trotter/