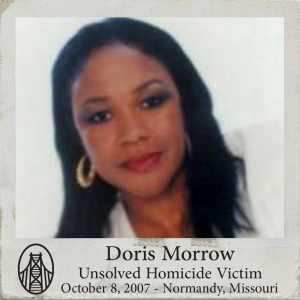 Unsolved Homicide: Doris Morrow
Source: Project Cold Case
November 25, 2019 | By Elena Curtis
Anyone who knew Doris Morrow would agree: once she was a part of your life, she became a significant figure in it. She was a stellar woman who was as protective as a rottweiler when it came to the people she loved.
Morrow was particularly significant to the women in her life: her mother, sisters, and her only child, Kimberly.
Life was forever changed on October 8, 2007 – Doris Morrow would no longer be able to protect her loved ones. She needed the protecting.
Kimberly received a call that day stating her mother wasn’t breathing and was “being worked on.” Shortly after the first call, she received a second saying that her mother was dead.
One of the investigating detectives told Kimberly that her mother had been tortured for four days prior to her death. Doris’ cause of death was listed as “blunt trauma at the hands of another.”
Two autopsies confirmed that there was foul play. But a more detailed account of what happened has never been established.
Morrow was 60 years old.
At the time of her death, Kimberly was preparing to move her mother out to California so they could be together. Her mother had been sick and Kimberly, who was secretly battling breast cancer for the first time, wanted to have her mother close to her. In one of their last conversations, Kimberly remembers her mother saying, “I want to be with my baby.”
Kimberly says that her mother’s case went cold within the first year. As Kimberly was tackling her illness and working, she was still trying to be as involved in the investigation as possible, despite living in a different state.
Police told Kimberly’s aunt that no arrests could be made in her mother’s murder. There were four people in the home, including the key suspect, at the time of her death. Not enough evidence could be found to convict anyone of the crime.
Kimberly says that her mother meant “pretty much everything” to her. The mother-daughter duo was always bound together by the “invisible umbilical cord,” she said.
Even following Doris’ death, the two women were able to find connections. While fighting her own breast cancer battle, Kimberly discovered her mother was also fighting the same disease. The autopsy revealed Doris was suffering from terminal breast cancer.
Neither had shared their fight with the other.
Kimberly says her mother’s death had a “domino effect” on the family. Following her mother’s death, Kimberly lost another important maternal figure in her family when her aunt, one of her mother’s sisters, died.
“She wanted to be with her sister,” says Kimberly. She says that to this day no one in the family discusses her aunt’s death.
At the time of the murder, Morrow’s home was foreclosed on and Kimberly was not able to be there to collect any belongings that she may have wanted to keep. Returning to St. Louis is often difficult for Kimberly due to her mother’s death. She prefers to keep her distance, she says.
Today Kimberly is a four-time breast cancer survivor and is doing everything she can to keep the memory of her mother alive. She is tough, but she can’t help but think about the lack of justice every day.
Kimberly wants to be her mother’s voice and doesn’t want to “let dust rise” on the woman she loved the most.
“I never thought I’d live without my mommy,” says Kimberly. “I want everyone to know she was real. She was real. She was my mommy.”
If you have any information on the unsolved murder of Doris Morrow, please call the Normandy Police Department at 314-385-3300.
https://projectcoldcase.org/2019/11/25/doris-morrow/