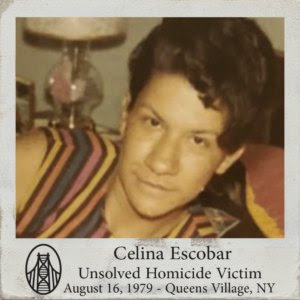 Unsolved Homicide: Celina Escobar
Source: Project Cold Case
February 7, 2022 | by Isabella Casapao
This story is part of a collaborative project between Project: Cold Case and a University of North Florida Journalism class.
December was always Celina Escobar’s favorite month.
She loved to entertain friends during the holidays. Her wedding anniversary was New Year’s Eve. It was the best time each year.
Celina hasn’t been able to celebrate anything in over 40 years.
On August 16, 1979, she was shot and killed in Queens Village, New York.
Her murder remains unsolved to this day.
Celina grew up in Colombia. It was there that she became a nurse and met her husband, Luis.
Celina was assigned to bring Luis out of surgery towards the end of her shift. However, she was interested in meeting him once he regained consciousness. So, she switched shifts with the next person so she could be there when he woke up.
“The rest is history,” said Celina’s only daughter, Luisa Escobar.
The two got married in Colombia and then moved to Queens Village. It was there that Luisa was born.
Luisa said her parents’ relationship was always what she aspired to have.
“My father always had my mother on a pedestal,” she recalled.
Her parents would always wait for each other to eat dinner so they could recount their day together.
Celina and Luis adored their daughter. They attended all her recitals and school events, always sitting front and center.
While Celina was only 5-foot-2-inches, she was always the loudest in the room cheering her daughter on. Every birthday, Luisa was awoken by her parents singing “Happy Birthday My Darling” by Nelson Ned.
“They would sing it every year, without fail,” Luisa laughed.
Whenever she hears that song now, she can’t help but cry.
During Christmas, Celina’s home was always filled with family and friends. She loved playing piano and violin, dancing, cooking, and doing anything to entertain her guests. Whenever Celina and Luis had company over, they would work together in the kitchen to prepare food for everyone.
“They always wanted to do things together,” Luisa recalled.
The family of three would travel to Colombia every summer for vacation. They would often stay in a finca – a house on a farm – in the mountains. They would visit family, go to the river, and play games all summer long.
It was a time of total bliss; kids would be swimming while adults would dance to music. Everyone was always laughing.
Celina wore a dress and heels everywhere she went. She always told her daughter to “dress to the nines” when they were going out. Celina even wore a long, pink, silk dress and fur coat to her daughter’s First Communion.
“It was May, and she was wearing her fur coat,” Luisa chuckled while looking through pictures of her and her mother.
“She’s even wearing her pearls for my seventh birthday!”
Luisa described her mother as a nice, caring, loving, helpful person. The trio would go see The Rockettes each year. One year, even though it was freezing outside, Celina took off her gloves and gave them to someone sleeping on the street.
Luisa questioned why, but her mother replied, “I could always get another.”
At the time of her death, Celina had two jobs – during the day she worked at a Standard Motors factory, and at night she worked doing commercial cleaning.
On August 16, 1979, Celina went to deposit a check on Jamaica Avenue in Queens Village around 10 p.m., after her night shift.
From there, the details of the incident are undetermined. According to the NYPD, Celina’s body was discovered in her car with two gunshot wounds to the head. The passenger side window was completely down and there was one bullet hole in the front windshield of the car. Police said it was unclear whether the killer was ever inside the car.
It is unknown whether Celina had stepped out of her vehicle at all during the encounter. Police did not have enough information to piece together what had happened – they could only report that Celina was dead.
Luisa woke up early that next morning and knew something was wrong. There were dozens of people filling her living room, and none of them was her mother.
A nun quickly took Luisa to school. Once there, school officials explained that her mother had died. Luisa could not believe her mother was gone.
To this day, police and Luisa don’t know many specifics from the night of Celina’s murder and her case has gone unsolved for over 40 years. Luisa hasn’t given up trying to figure out who killed the most important person in her life.
Every week, she continues to call the police for more answers to the question she’s been asking herself for decades: what happened to her mother?
After Celina’s death, Luis and Luisa were all each other had. They spread pictures of Celina all around the house, but the house wasn’t a home anymore without her.
“He was devastated,” Luisa said of her father.
Luisa had just turned 10 when her mother was taken away from her, and for more than 40 years, she hasn’t gone a day without thinking of her mother. She drives by their old home, her mother’s grave during birthdays, anniversaries, and Mother’s Day. She still attends the church that her family attended together.
“Every year,” Luisa stated.
Luisa’s favorite picture of her and her mother was the last one taken of them. Luisa has her arms tightly wrapped around her mother’s stomach. Both have huge smiles on their faces and Celina’s eyes are closed.
That picture resides in the background of Luisa’s phone screen where she sees it every day. Luisa has never forgotten her mother’s smile. It comforts her to see it.
If you have any information on the unsolved murder of Celina Escobar, please call the New York Police Department at (718) 574-1796.
https://projectcoldcase.org/2022/02/07/celina-escobar/