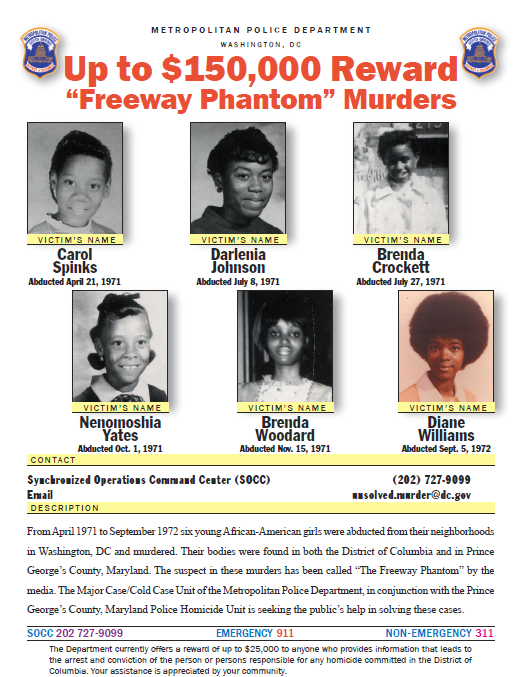 Up to $150,000 Reward. “Freeway Phantom” Murders
Source: Metropolitan Police Department of the District of Columbia
Saturday, September 30, 1972
From April 1971 to September 1972 six young African-American girls were abducted from their neighborhoods in Washington, DC, and murdered. Their bodies were found in both the District of Columbia and in Prince George’s County, Maryland. The suspect in these murders has been called “The Freeway Phantom” by the media. The Major Case/Cold Case Unit of the Metropolitan Police Department, in conjunction with the Prince George’s County, Maryland Police Homicide Unit is seeking the public’s help in solving these cases.
Victims:
Carol Spinks - Abducted April 21, 1971
Darlenia Johnson - Abducted July 8, 1971
Brenda Crockett - Abducted July 27, 1971
Nenomoshia Yates - Abducted Oct. 1, 1971
Brenda Woodard - Abducted Nov. 15, 1971
If you have information on these or any unsolved homicides you may e-mail us at unsolved.murder@dc.gov
Anonymous Tip Line (202) 727-9099
https://mpdc.dc.gov/node/218332