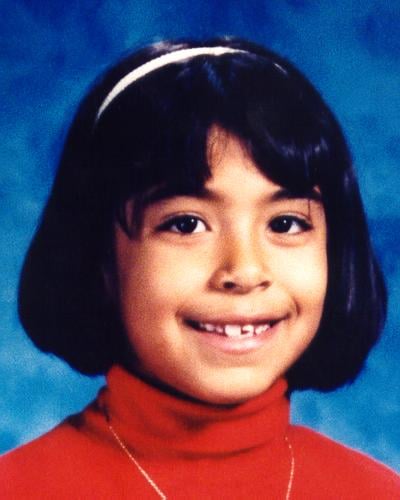 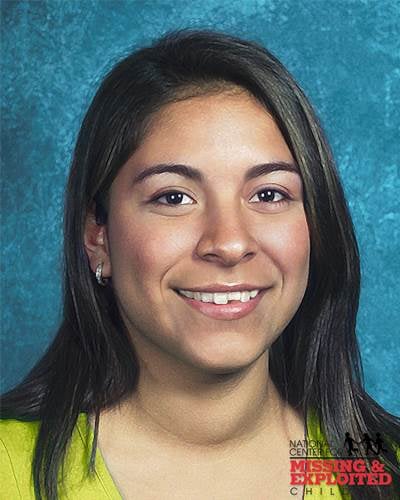 Missing Since
01/11/1996
Missing From
Tucson, Arizona
Classification
Non-Family Abduction
Sex
Female
Race
Hispanic
Date of Birth
10/15/1988 (33)
Age
7 years old
Height and Weight
3'5, 50 pounds
Clothing/Jewelry Description
A faded purple or turquoise t-shirt with white lettering on the front, multicolored pastel floral-printed shorts, Guess? shoes, a gold chain with a pendant reading "Little Angel", a ring with a red stone and another ring engraved with the letter K.
Distinguishing Characteristics
Hispanic female. Black hair, brown eyes. Karen's upper right front tooth is larger than her other teeth, and she was missing several baby teeth at the time of her 1996 disappearance. Her ears are pierced and she has a pea-sized mole behind one ear. She is of Mexican descent and speaks both Spanish and English.
Details of Disappearance
Karen was last seen playing outside of her family's residence at Saguaro Crest Apartments on in the 100 block of west Valencia Street in Tucson, Arizona on January 11, 1996. She was roller-skating with her younger sister and some friends that evening and was last seen when she returned to her apartment to drop off her skates before going outside again to play.
Her mother reported Karen as missing when she called her daughter inside for dinner at approximately 6:30 p.m. that evening and noticed Karen had disappeared. She was last seen walking out of the courtyard of the complex. Neither her sister nor any of their playmates had seen her vanish or heard a scream or a struggle. She has never been seen again.
It is possible that Karen was abducted by an unidentified male seen in the area around the same time she disappeared. A sketch of the suspect is posted with this case summary. He is described as a Hispanic or Caucasian male with light brown hair and green or hazel eyes. He who was approximately 30 to 46 years old in 1996. He was 5'6 to 5'8 tall and weighed about 170 pounds, and may have had a mustache.
This unidentified man is believed to have also been responsible for the abduction, rape and beating death of another child, six-year-old Esther "Lizette" Galaz. Authorities stated the circumstances of Lizette's murder were very similar to Karen's disappearance: both girls were Hispanic, disappeared outside their apartment complexes on the south side of Tucson at around 6:30 p.m. during the holiday season, and were wearing t-shirts and floral-print shorts at the time.
Another possible suspect in Karen's case is Rodolfo Sedeno Morales. Morales resided in Saguaro Crest Apartments in 1996 and is currently serving a prison term for the abductions and sexual assaults of five Hispanic girls from the Tucson area between 1993 and 1994. All his victims were between five and nine years old. He has not been charged in connection with Karen's disappearance, however, and Morales's wife gave him an alibi for the time of her abduction.
Karen's case remains open and unsolved. Her family members were cleared of any suspicion in her disappearance shortly after the investigation began in 1996. Her father was in Mexico at the time of her disappearance; her mother is also a Mexican native.
Karen enjoyed playing Nintendo games, roller skating and riding her bicycle in 1996. She was a first-grade student Elvira Elementary School and was learning to read, write, and sing at the time of her disappearance. Her biological father lived in Mexico and isn't a suspect in her case, and neither is anyone else in her family. She has never been located.
Investigating Agency
Tucson Police Department 520-791-4444
https://charleyproject.org/case/karen-rosalba-grajeda