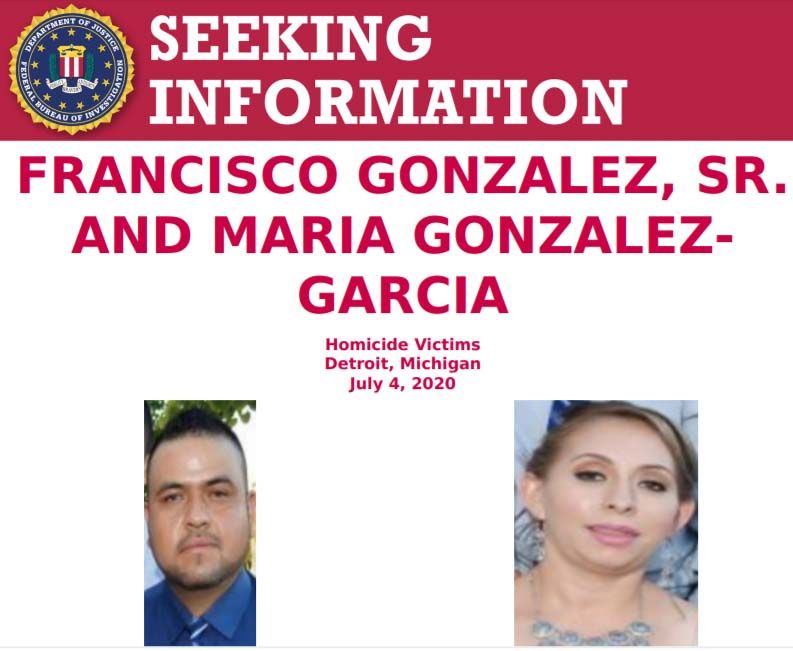 Homicide Victims
Detroit, Michigan
July 4, 2020
Reward:
The FBI is offering a reward of up to $10,000 for information leading to the identification and arrest of the individual(s) responsible for the murders of Francisco Gonzalez, Sr. and Maria Gonzalez-Garcia.
Details:
The Federal Bureau of Investigation's Detroit Field Office and the Detroit Police Department are seeking the public's assistance in identifying the individual(s) responsible for the shooting deaths of husband and wife, Francisco Gonzalez, Sr., and Maria Gonzalez-Garcia, and the attempted murder of their three children aged 15, 13, and 9.
On July 4, 2020, at approximately 12:59 a.m., the Gonzalez family was driving north on Holmur Street near Mullane Street in Detroit, Michigan. Francisco Gonzalez, Sr., who was driving the vehicle, pulled over to allow a vehicle behind him to pass. As the vehicle passed by, suspects opened fire on the Gonzalez family vehicle. Each of the family members sustained gunshot wounds from the rifle shots. Both Francisco Gonzalez, Sr. and Maria Gonzalez-Garcia died from their injuries.
This case is being investigated as part of the Department of Justice's Operation Legend, a coordinated federal and local law enforcement initiative to fight violent crime.
Submit a Tip:
If you have information related to these homicides, please contact the FBI's Detroit Field Office at (313) 965-2323 or the FBI Tipline at 1-800-CALL-FBI. You can also report information online at tips.fbi.gov.
You may also contact your local FBI office, or the nearest American Embassy or Consulate.
Field Office: Detroit
https://www.fbi.gov/wanted/seeking-info/francisco-gonzalez-sr-and-maria-gonzalez-garcia