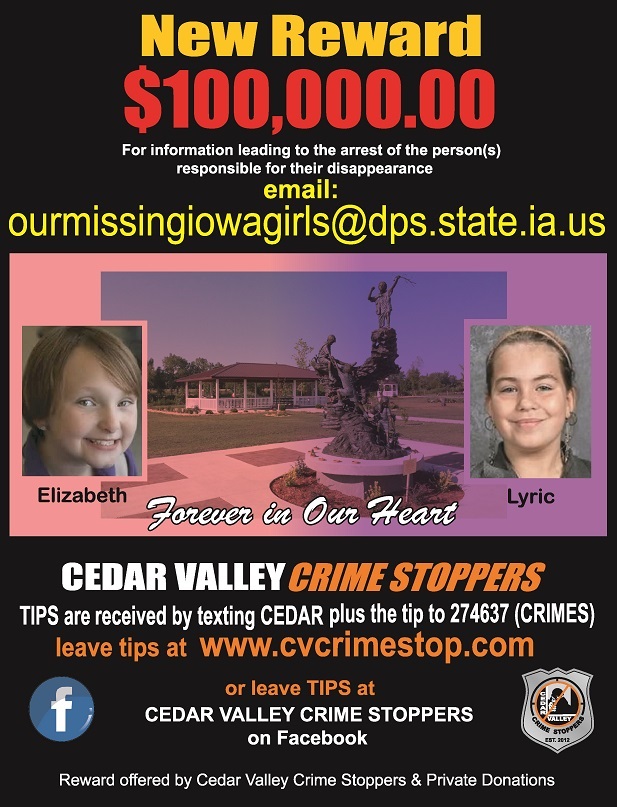 Case Summary / Timeline compiled by Jody Ewing
Lyric R. Cook-Morrisey, 10, and her cousin, Elizabeth Collins, 8, were reported missing to the Evansdale Police Department in Evansdale, Iowa, on Friday, July 13, 2012.
The girls were seen at about 12:23 p.m. July 13 on Brovan Boulevard in Evansdale, and then spotted between 12:30 and 1 p.m. on Gilbert Drive not far from Meyers Lake, a popular fishing and recreation area in the northeastern Iowa city of about 4,700 residents.
Their bikes and Elizabeth’s purse were later found on a trail on the southeast corner of Meyers Lake about 4 p.m. the same day the girls went missing, but there were no clues as to their whereabouts.
The girls’ grandmother, Wylma Cook, told the press she last saw the girls riding their bikes near downtown Evansdale about 12:15 p.m. July 13.
On Wednesday, December 5, 2012, hunters came across two deceased bodies in the Seven Bridges Wildlife Park near Readlyn in Bremer County — a wildlife area about 25 miles from where the girls were last seen. They contacted law enforcement officials at 12:45 p.m.
On Thursday, December 6, 2012, Chief Deputy Rick Abben with the Black Hawk County Sheriff’s Office held a press conference to announce officials were confident the bodies were those of Lyric and Elizabeth.
Cedar Valley Crime Stoppers 855-300-TIPS(8477)
https://cvcrimestop.com/
https://iowacoldcases.org/case-summaries/lyric-cook-and-elizabeth-collins/