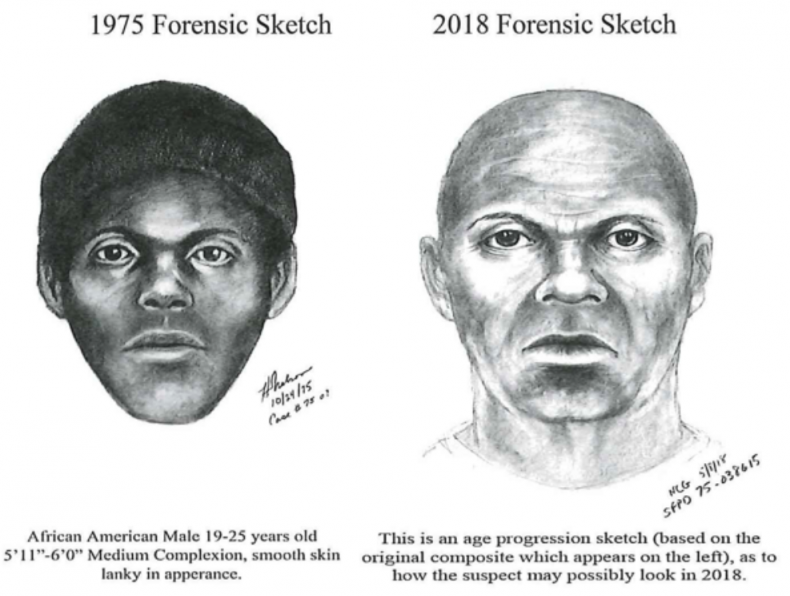 Source: San Francisco Police Department
In the mid-1970s the San Francisco Police Department investigated several violent assaults of gay, white male victims. As a result of the investigation, at least one victim provided information that led to a forensic sketch of the suspect that was developed in 1975.
At least one of the victims provided information to police that the suspect said he was a cartoonist and the suspect was doodling while conversing with the victim in a late-night diner.
During the same period of time, five victims were found murdered in the Ocean Beach / Golden Gate Park area. As a result of a new investigation, it is believed that Warren Andrews may be the sixth victim of the “Doodler.” On April 27, 1975, Andrews was a victim of an assault at Land’s End. Andrews was found unconscious and never regained consciousness dying several weeks later. All six (6) victims are believed to be Gay Caucasian males.
A forensic sketch that shows an “age progression” of the suspect has been created and is attached to the most current Crime Bulletin (see attached).
January 27th, 2022 marks the anniversary of the first “Doodler” homicide which occurred 47 years ago. The SFPD has increased the reward from $100,000 to $200,000 for information leading to the identification, apprehension, and conviction of the serial homicide suspect.
The SFPD Homicide Detail is actively working this cold case investigation and anyone with information is asked to call the SFPD 24 hour tip line at (415) 575-4444 or Text a Tip to TIP411 and begin the message with SFPD. You may also contact Cold Case Investigators Sergeant Alan Levy (415 553-9245, alan.levy@sfgov.org), Investigator Daniel Dedet (415 553-1450, daniel.dedet@sfgov.org), or Investigator Daniel Cunningham (415 553-9515, daniel.cunningham@sfgov.org). You may remain anonymous.
Crime Bulletin Re-Issue of Suspect Sketch (PDF)
https://www.sanfranciscopolice.org/sites/default/files/2022-01/SFPDCrimeBulletin22-011-20220127.pdf
https://www.sanfranciscopolice.org/news/doodler-cold-case-investigation-update-22-011