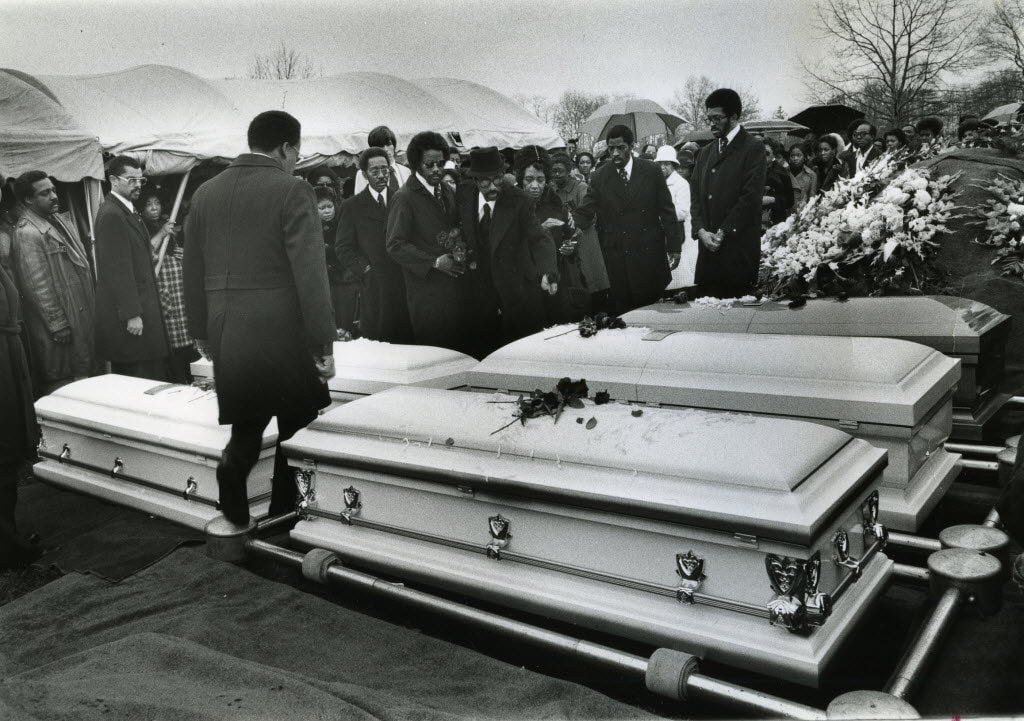 Mother, 4 Children Are Shot to Death In Home in Teaneck

By Ronald Sullivan Special to The New York Times
Dec. 7, 1975
TEANECK, N.J., Dec. 6—A mother and her four children were shot to death today in their home in this suburban Bergen County community.
The bodies were discovered late this afternoon by the father, Wesley Diggs. The victims were found scattered throughout their white stucco and red brick home on a quiet street here.
Late this evening, the police said they had no suspects or any explanation for the killings.
The victims were identified as Jean Diggs, 39, and the children—Audrey, 19; Allison, 16; Wesley Jr., 12, and Roger, 5.
Their bodies were found at approximately 4 P.M. when Mr. Diggs, who was returning from New York, entered the home and discovered one of his daughters, reportedly Audrey, lying on an upstairs bedroom floor.
According to the police, Mr. Diggs ran next door and asked for help from the Edward Murphy family.
“My daughter's been hurt!” he shouted. “Call an ambulance!”
Mrs. Murphy and her two daughters, one of them a nurse, ran from their home at 270 Carleton Terrace across the driveway and into the Diggs home at 266.
The nurse went upstairs and came down moments later, shaken and pale.
“Mary, she's dead, she's dead,” she told her sister.
Then the grim discoveries continued. The two sons, Roger and Wesley, were found in a bedroom.
Mrs. Diggs was then found in the finished basement. Finally, the body of the second daughter, Allison, was found in another bedroom upstairs. All apparently had been shot in the back of the head.
The police said there were no signs of a struggle. No weapon was immediately found and police interviews with neighbors failed to elicit any new evidence.
Chief Robert E. Fitzpatrick of the Teaneck police, a veteran of 40 years of police work in the county, said it was the worst crime of his career.
Township and county police officials were conducting a joint investigation of the murder. Mr. Diggs was taken to police headquarters about a mile away, from which he was released around midnight. The bodies of the five victims were removed from the cordoned‐off Diggs home to the county morgue.
According to neighbors, the Diggses were one of the first black families to move to Carleton Terrace, arriving there about six years ago. Other black families have moved in since, and the neighborhood as well as the township enjoys a reputation of having achieved racial equanimity.
One neighbor described the Diggses as “extremely friendly and well‐received.”
“Jean Diggs was a charming, charming woman—I can't believe anyone would want to harm her,” a neighbor said.
Officials said that Mr. Diggs was the proprietor of Diggs' Den, a Harlem tavern at 320 West 145th Street, and also ran a gift shop, the location of which was not given. According to friends, Mr. Diggs's work kept him away from his family about 18 hours a day.
Tri-Community Crime Stoppers (201) 833-4222.
Teaneck Police Department Detective Bureau 201-837-2565
https://www.nytimes.com/1975/12/07/archives/mother-4-children-are-shot-to-death-in-home-in-teaneck-a-mother-and.html