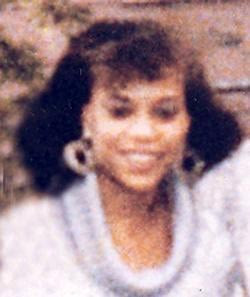 Source: Portland Police Bureau
Cold Case - Ruby McLemore (KPTV)
https://www.facebook.com/watch/?v=10150517609970974
Case #89-4996
On January 15, 1989, at approximately 8 p.m., a resident of the 300 block of NE Holman St heard what he thought was gunshots outside his residence.  This resident looked out his window and could not see anything, but when he went outside on his porch, he saw a woman lying in the street.  The resident called 911 then went to the woman’s side.  She was unable to speak, but was still alive.  He covered her with a blanket and awaited emergency responders.
When emergency responders arrived, the woman had stopped breathing.  She was transported to a local hospital where she was declared deceased.  Identification recovered at the scene was used to identify this woman as Ruby Denise McLemore, a 21-year-old black female, who was  5’2” and 95 to 100 lbs.  She was wearing a black beret, white pants, leg warmers, a black leather jacket, a sweatshirt and tennis shoes at the time of her death.  A later autopsy determined that Ms. McLemore died of a single gunshot wound to the torso.
On February 12, 1989, an anonymous person called the Portland Police Bureau Crime Stoppers tip line.  This person inquired about a reward, described the crime scene and victim and stated that they had witnessed this murder.  As police pressed for details, this person said that they would call back the next day to talk to the primary investigator.  They never called and remain anonymous to this day.
Witnesses may contact Cold Case Homicide Unit investigators directly at (503) 823-0400. To remain anonymous, witnesses may provide information through Crime Stoppers of Oregon.
Crime Stoppers of Oregon offers cash rewards for information, reported to Crime Stoppers, that leads to an arrest in any unsolved felony crime and tipsters can remain anonymous.
Information about this case or any unsolved felony crime may be eligible for a cash reward of up to $2,500.
Information learned from social media sites such as Facebook, Twitter or YouTube should be shared as these tips may lead to the identification of a suspect or suspects. Links can be shared anonymously through Crime Stoppers.
Submit an anonymous tip:
Visit the App Store and download P3 Tips to submit secure and anonymous tips.
Online at https://www.p3tips.com/823
Call 503-823-HELP (4357).
https://www.portlandoregon.gov/police/article/457844