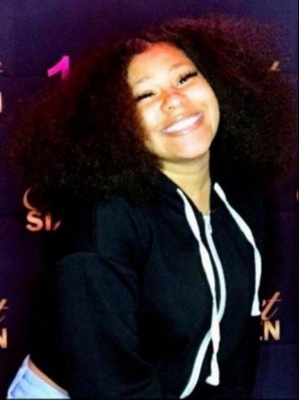 Reward:
The FBI is offering a reward of up to $25,000 for information leading to the arrest and conviction of the individual(s) responsible for the murder of Makayla Maree Harris.
Details:
At approximately 2:00 a.m., on July 17, 2021, Portland Police responded to reports of a mass shooting in the 300 block of SW Third Avenue between Harvey Milk and Washington streets in Portland, Oregon. When they arrived, they found seven people wounded by gunfire.  Makayla Maree Harris, 18 years old, died after being transported to the hospital. It is believed that Makayla was an unintended target in a gang-related shooting. The shooters fired from a car in the street before it sped away.
Submit a Tip: 1-800-225-5324.
It is also believed that many potential witnesses ran off after the shooting and may not have provided information to investigators. If anyone has information, witnessed any part of what happened, or has video of anything that happened prior to, during, or after the shooting, they are asked to contact law enforcement.  You may also contact your local FBI office, the nearest American Embassy or Consulate, or you can submit a tip online at https://tips.fbi.gov/
Field Office: Portland
https://www.fbi.gov/wanted/seeking-info/makayla-maree-harris