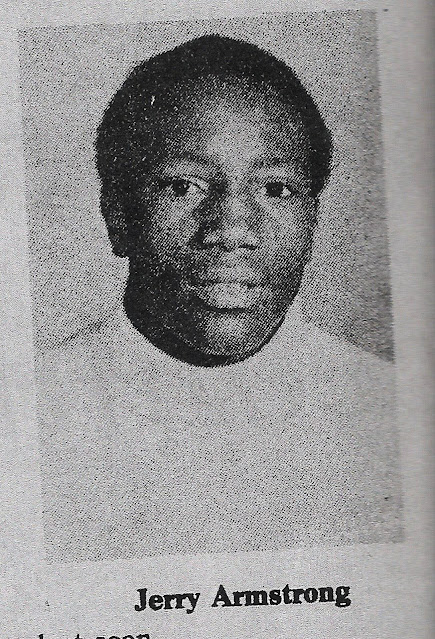 Missing Since
12/23/1977
Missing From
Hernando, Mississippi
Classification
Endangered Missing
Sex
Male
Race
Black
Date of Birth
08/01/1960 (61)
Age
17 years old
Height and Weight
5'6, 145 pounds
Clothing/Jewelry Description
A dark green suit, a yellow shirt, a green tie and black shoes with stacked heels.
Associated Vehicle(s)
White two-door 1973 Pontiac LeMans with red and black racing stripes on the side and the Mississippi license plate number DAY 485
Distinguishing Characteristics
African-American male. Black hair, brown eyes. Jerry has a scar over his left eye.
Details of Disappearance
Jerry was last seen in Hernando, Mississippi on December 23, 1977. That day he borrowed his brother James's white two-door 1973 Pontiac LeMans and drove to his school prom at the National Guard Armory. He was a senior at Hernando High School, and a quarterback on the football team.
Jerry disappeared after he took his girlfriend home. He has never been heard from again and the car he was driving was never recovered. It has red and black racing stripes on the side and the Mississippi license plate number DAY 485. A photo of the vehicle is posted with this case summary.
One theory is that Jerry was targeted by the local Ku Klux Klan in a case of mistaken identity. His brother James was dating a Caucasian woman, which could have made the Klan angry at him. It's possible that Klan members attacked and murdered Jerry, believing he was James.
James died of a gunshot wound to the chest in 1984. His death was ruled a suicide, but his mother and his other brother, Johnny, doubted that explanation. Johnny criticized the police, saying they failed to thoroughly investigate Jerry's disappearance in 1977. The current investigating officer said valuable documents were missing from Jerry's police file.
Authorities stated they hadn't ruled out anything in Jerry's disappearance, but they described him as an ordinary teenager who had no enemies and no reason for anyone to want to hurt him. He had a steady girlfriend and a job at a gas station.
Jerry's mother died in 1987, but Johnny is still alive and hopes for answers in Jerry's disappearance. His case remains unsolved.
Investigating Agency
Mississippi Bureau of Investigation 601-933-2600
DeSoto County Sheriff's Department 662-469-8027
Crime Stoppers 1-888-8CRIMES  (1-888-827-4637)
https://charleyproject.org/case/jerry-lee-armstrong